Set Down My Name, Sir

One of our family’s favorite books is “Dangerous Journey,” the story of Pilgrim’s Progress for kids.  The first time  through, I made it all they way to the Dark River (chp 8 of 9) without crying.  I’ve slowly been working my way toward the front of the book.  This last time I didn’t even make it to the end of chapter 2 before the lump in my throat swelled up and all the kids stared at me a little funny.   I take great comfort in the commonalities of our pilgrimage to the heavenly city.  Over years and cultures, the way of Christ is still the only way.  So what made me cry this time?  Well, read it for yourself: 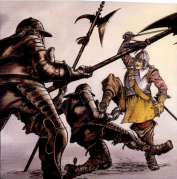 Finally, Christian was led to a gateway like the one which he had lately entered.  Beside it sat a man at a table, with a book and inkhorn before him to take the name of anyone who wished to pass through.  But the gate was guarded by fierce men in armour, ready to do what hurt and mischief they could to any traveller.  And though there stood a great company of people desirous of going in, they didn’t dare.  Then, as it were a scene upon the stage, Christian saw a valiant man approach.

Set down my name, sir; he said. [lump begins]

That done, he drew his sword and rushed upon the armed men, who laid upon him with deadly force.  But the man, not at all discouraged, fell to cutting and hacking most resolutely.  So, after he had received and given many wounds, he cut his way to safety. [tears well up]

I think I know the lesson of this, said Christian triumphantly, as he resumed his journey.  My safety will depend, it seems not on cleverness,
but on simple courage. [tears come down]

Now, I am an evangelist for thinking. hard.  But the way is narrow (see chapter 5: The Valley of the Shadow of Death) and ditches await us on both sides.  There is a way to hide cowardice behind “seeking wisdom” or laziness behind “careful planning.”  The time comes when action must be taken or our faith proves dead.

Abraham really took Isaac up the mountain with firewood and a knife.  David really ran at a giant with a slingshot and 5 smooth stones.  Ruth followed her widowed mother-in-law into a land that was not her own.   Rahab hid the spies.  Peter stood on the water.   Jesus went to the cross sweating blood.

In mom-speak:  The laundry plan won’t get the laundry clean and a heap of good books won’t get my children learned.  At some point, the research must be executed even if it means opposition, setbacks, and pain.  We must fight.  But take courage, we know the end is victory.

What do you think? Cancel reply